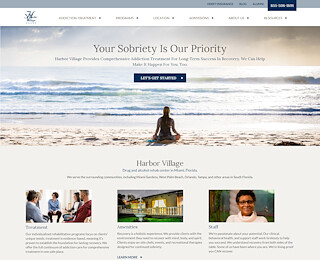 Valium, whose scientific name is diazepam, is a type of benzodiazepine that entered the prescription drug market in the 1960s. Millions of people consumed it because it was regarded as a cure-all. In no time, the side effects of the pill, severe withdrawal, turned users into addicts. The drug is still used today, and addiction to it can progress fast if it isn't used as prescribed. With time, it's harder for the brain of valium abusers to function normally without the drug. Even worse, some individuals with an addiction to valium may not realize it.

Addiction to the drug is best addressed at a reputable treatment center with psychological therapies and a gradual dosage reduction. Besides detox, research has found that behavioral therapies can help persons with substance use disorder. Harbor Village is an addiction treatment facility that’s dedicated to helping those with a dependence on valium to fight their addiction while protecting their confidentiality.

Valium is used as a prescription drug for muscle spasms, sleeplessness, anxiety, and in some cases, for alcohol withdrawal management. Like many other benzodiazepines, valium usage is popular among people looking to get high because of its depressant effects. Users of valium commonly take it with other substances, including alcohol. Abuse occurs when an individual:

The drug suppresses the activity in a user’s nervous system. When someone abuses the drug, they will experience a high that includes:

After the effect of valium peaks, users can experience a comedown. As a result, the mellow begins to fade and is replaced by a rapid heart rate, stomach cramps, irritation, fever, and seizures.

Abuse of valium over extended periods can have adverse effects on the body and brain. Some of the effects can be permanent and even life-threatening. The long-term impact of excessive use of valium include:

Chronic abuse of valium is associated with:

Prolonged use of valium can lead to irreversible damage to the user's brain, liver, and cardiovascular system. People depend on valium to treat a number of serious issues such as anxiety and sleep disorders. Unfortunately, misuse of the drug can exacerbate various psychiatric problems that caused an individual to start taking valium, including depression and anxiety.

Valium abuse also increases the risk of contracting hepatitis, HIV, and other infectious ailments. The risk is associated with practicing unsafe sex, especially in times of disinhibition, and when sharing needles.

At Harbor Village, we have a team of dedicated specialists to address all your needs. They focus on the symptoms of substance abuse, both long and short-term, to help you recover, adapt to your environment, and maintain sobriety. Don’t delay your recovery any longer. We encourage you to take our virtual tour and call 855-767-8285 to speak to one of our support specialists today.